We are currently conducting daily tours at 10:30 a.m. & 1:30 p.m. Online bookings are the best and only way to reserve tickets, day of the tickets may be available if all online tickets are not sold. ($25 for adults, $20 for students/seniors/active military).

Tours are conducted seven days a week at 10:30 a.m. & 1:30 p.m., and begin at the 1850 House Museum Store (523 St. Ann Street) on Jackson Square. Reservations are not required, but we do recommend booking your tickets ahead of time.

Our French Quarter walking tours are conducted by city licensed guides and emphasize the history, architecture, and folklore of this fascinating city.

Tour and store proceeds benefit Friends of the Cabildo, a non-profit volunteer group organized in 1956 to provide support for the Louisiana State Museum.

In addition to other cultural institutions throughout the state, there are five museums in the New Orleans French Quarter that are operated by the Louisiana State Museum. The Cabildo traces the history of Louisiana through exhibits such as We Love you, New Orleans, From “Dirty Shirts” to Buccaneers: The Battle of New Orleans in American Culture and People & Power: Building History at the Cabildo while the 1850 House shows life as it was in mid-nineteenth century New Orleans.

Shop at the 1850 House Museum Store before or after your tour for great books and local mementos of your visit to New Orleans! 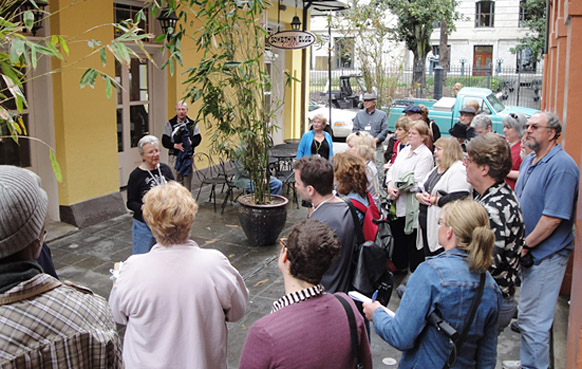 Put on your best walking shoes, bring a bottle of water and a good camera, and join us for a special walking tour! Tickets are limited to 15 spots for each tour, and no tickets are sold the day of the tour. Don’t miss out. Reservations are required. Please see our events calendar for dates and ticket information. Tours are $25, or $20 for Friends of the Cabildo/Louisiana Museum Foundation members.

Did you know that New Orleans used to have streets named “Love,” “Craps,” and “Good Children?” These fanciful names were designated by the colorful Bernard de Marigny when he subdivided his plantation in the early 1800s to form the city’s first primarily residential subdivision, Faubourg Marigny. Join us as we explore this fascinating area adjacent to the French Quarter. Listed on the National Register of Historic Places, and a city-designated historic district, Faubourg Marigny has many well-preserved nineteenth century Creole cottages, a style popular with immigrants from Saint-Domingue, Creoles and free people of color who flocked to the new faubourg. We will also tour Esplanade Avenue, originally the site of fortifications built by the French and Spanish colonial governments, was transformed after the Louisiana Purchase to a grand European-style boulevard with palatial townhouses and mansions flanking a wide neutral ground with stately live oaks. The Creole Neighborhoods tour departs from the Old U.S. Mint (Esplanade Avenue gates).

Most residents and visitors alike know of the Garden District as a stunning neighborhood full of Greek Revival and Italianate architecture, bounded by Jackson, St. Charles, and Louisiana avenues, and Magazine Street. But do you know who established the Garden District? What part did the NO & Carrollton Railroad play? Why do we always hear tour guides reference “Lafayette” and “Livaudais?” Discover the answers to those questions and more when exploring the Garden District with the Friends of the Cabildo. As we unveil the Garden District’s incredible architecture, and the influence of culture, climate, political events, and famous figures on the area, you will see these grand residences as more than just beautiful houses; they are the enduring statements of mid-nineteenth century Americans in New Orleans. The Garden District tour departs from 1452 Jackson Ave. (riverside corner at Prytania St.).

Walking along the busy concrete sidewalks of the Central Business District today, it is difficult to imagine that the streets now shaded by skyscrapers were originally part of Belair, the plantation of city founder Bienville—part of his 1719 land grant which stretched to the present-day Jefferson Parish line. The Friends of the Cabildo Faubourg St. Mary walking tour reveals the history behind the present day commercial district, from the plantation beginnings through the explosive American growth during the 1800s, to the present day revival. This tour provides a historic backdrop for a new appreciation of the American Sector. The Faubourg St. Mary tour departs from Firestone Tire (corner of Julia and Camp streets) and will end at Lafayette Square.

Most New Orleanians have enjoyed a sloppy roast beef poboy at a legendary Irish bar off Magazine Street, or caught cabbages, potatoes and carrots at the annual St. Patrick’s Day Parade. But not everyone has stopped to consider the history of the immigrant populations who lived and worked near the docks along the Mississippi River, their culture and traditions forming the foundation of the area we now know as the Irish Channel. The Friends of the Cabildo’s Irish Channel Tour explores this diverse home of working class immigrants, natives and free people of color. From famous churches to Irish bars, unique architecture, famous historic figures and notable festivals, the Irish Channel Tour reveals the many facets of this neighborhood beloved by locals and visitors alike. The Irish Channel tour departs from the Sophie B. Wright Place (Intersection of St. Andrew & Magazine Streets).

Nineteenth century residential life in New Orleans comes alive through the Friends of the Cabildo Lower Garden District Tour! The district’s extensive collection of 1800s residences- primarily side hall, double-galleried homes in the Greek Revival and Italianate styles – will capture your imagination with both the romance and realities of life in these grand homes in the age before modern conveniences. Bounded by the Crescent City Connection, Mississippi River, Jackson Avenue and St. Charles Avenue, the Lower Garden District was developed as six different faubourgs, and it known for its many irregularly shaped parks. You will gain a new understanding of the history and culture of the area through a review of its architecture, geography and famous residents. The Lower Garden District tour departs from the Muses statue, at the intersection of Prytania and Terpsichore street.

New Orleans was the first city in America to have opera. In fact, New Orleans had two full time, professional opera companies before any other city in America had its first professional opera company. In the beginning of the 19th century operas would premier here in New Orleans before they showed in New York. In 1835 we built the largest and most extravagant theater in the United States. And it is the same city that gave birth to jazz in the mid-1890’s. It is an amazing story, and an amazing century. This tour takes you through the development of the French Opera and its golden years between 1842 and the Civil War. It also describes the rich concert life of the city, and our passion for dance. And you will see where the first Quadroon Ball were held, and learn the truth instead of the myth. Ever wonder where New Orleans got its fascination with brass music? Ever wonder why jazz started here? Or how it developed? This tour answers those questions, and explores the rich culture of the city during a remarkable century. The Music & Dance in 19th Century New Orleans tour departs from the front of the Cabildo (by the Spanish cannon).

This tour starts with the birth of Louis Armstrong in Black Storyville in 1901, and explores what influenced him during the early years of jazz. Then we explore how jazz continued to develop in New Orleans after Louis left in 1922. We will focus on the New Orleans jazz men and women who stayed in the city and continued to play here. This will include the “revival” of jazz in the 1940’s, the advent of Preservation Hall in the 1960’s, and will bring us all the way to the present. This tour combines several important, historical sites like George Lewis’ home, Preservation Hall, and the George H. Buck Foundation (the largest catalog of authentic jazz in the world) with a great playlist. The tour includes tunes from Louis Armstrong’s early recordings, recordings from New Orleans jazz greats from the past, and tunes from some of our greats that are alive and swinging in New Orleans. The New Orleans Jazz tour departs from the Old U.S. Mint (Esplanade Avenue gate).

Experience the storied history of New Orleans music with the FOC’s New Orleans Music History Tour. Begin at the Old U.S. Mint and travel throughout the French Quarter, hear stories and visit locations that have defined the New Orleans music scene for over 100 years. Musicians such as Louis Armstrong, Sidney Bechet, George Lewis and Danny Barker will be discussed as well as famous music venues such as Preservation Hall and the Palm Court Jazz Club. The New Orleans Music History tour departs from the Old U.S. Mint’s Barracks street entrance (across from the Louisiana Pizza Kitchen).

Between 1947 and 1965 Cosimo Matassa recorded 250 national charting singles, including 21 gold records in his three different recording studios in the French Quarter. This tour visits all three former studios and enjoy a huge playlist of best New Orleans rhythm and blues hits. Great history, great stories and wonderful tunes. Everything from Good Rockin’ Tonight by Roy Brown in 1947, to Tutti Frutti by Little Richard in 1955, to Tell It Like It Is by Aaron Neville in 1966. And, of course, lots of Fats Domino and Allen Toussaint. We’ll explore how R&B developed in New Orleans, and follow Cosimo’s career, all the way to the Matassa Market, the family business on Dauphine Street where he retired in the 1980s. Matassa was inducted into the Rock and Roll Hall of Fame in 2012, and his first studio, the J&M Music Shop, on Rampart Street is the 11th historic American rock ‘n’ roll landmark. The New Orleans Rhythm & Blues tour departs from the corner of Royal & St. Philip streets (McDonogh #15 corner).

A booming area of revitalization at the intersection of the Central Business District, Medical District, and the sports/entertainment corridor of downtown, the South Market District is experiencing a renaissance placing it squarely in the up-and-coming areas of the city. But what was the historical significance of South Market before the construction projects? What are the stories behind the buildings being redeveloped as apartments, condominiums, hotels, and restaurants? Join the Friends of the Cabildo as we examine the fascinating mix of adaptive reuse, historic preservation, and new construction in the “Old CBD.” This one-time tour of rapidly transforming South Market will provide a unique snapshot of techniques used to resurrect this district while preserving its historic character. The South Market District tour departs from Rouses at 701 Baronne St. (corner of Girod and O’Keefe).

This walking tour of Treme provides a rich, detailed perspective on one of the city’s oldest and most storied neighborhoods. Originally known as “back of town,” the old Creole feel of Treme makes it easy to imagine the early 1800s multicultural community formed by immigrants, free people of color, and refugees from Saint-Domingue. An important center of the city’s African-American and Creole culture, Treme is the cherished home of fourth and fifth generation residents who strive to maintain the area’s cultural and social traditions. We will trace the origin and development of Treme through the amazing nineteenth century architecture (including Creole cottages, townhouses, and shotgun houses), geography, and urban influences dating from the subdivision of this land by Claude Treme in the 1790s to the present day. The Treme tour departs from the Basin Street Station at 501 Basin St.